Evaluation Site Area: The acreage value listed here represents acreage of the area selected for this AgSite report (area within the red polygon).

County: This AgSite report lists all counties that have a portion of their area within the evaluation site.

Legal Description (Central Section): A legal description listed with an AgSite report originates from the Public Land Survey System. The system breaks land areas into identifiable sections, which are 1-square-mile land masses. If the selected land tract contains more than one section, then this report lists the center section.

Note that not all states are included in the Public Land Survey System. Land tracts in 30 states located in the southern and western U.S. use the system. Those that don’t are primarily located in the eastern U.S., but the system also doesn’t include Texas. If your AgSite report doesn’t include a legal description, then you may have selected a land tract that’s not divided or described using the Public Land Survey System.

A township encompasses 6 square miles, and it can be subdivided into 36 sections, which are roughly 640 acres each. Within a township, each section is numbered from “1” to “36.” The numbering begins with section No. 1 in the township’s upper right-hand corner. From there, the numbering follows an “s” pattern, and it ends with section No. 36 in the township’s lower right-hand corner. See the following schematic. Sections can be, but are not on this report, further subdivided into quarter sections, halves of quarter sections, quarters of quarter sections and so forth.

Organization of Sections in a Township 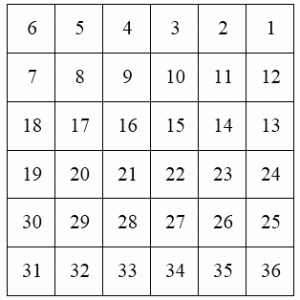 The “Sec. 18, T48N, R12W, 5th PM” legal description describes part of the University of Missouri campus. To locate this tract on a map, find the fifth principal meridian, and from it, count 12 township columns to the west. From the base line, count 48 township columns north. Within the township where the range and township locators intersect, this specific University of Missouri land tract’s center section is found in section No. 18.

Significance: Legal descriptions are important because they precisely identify a given land site in titles, contracts and other legal documents.

Sources and Other Resources:

Center of Site Latitude/Longitude: Based on the Geographic Coordinate System, latitude and longitude lines intersect at a given set of coordinates. Latitude lines run horizontally, and they’re positioned to be parallel to the equator. From the equator, latitude lines extend 90 degrees north to the North Pole, and they reach south 90 degrees to the South Pole. Lines south of the equator may be written as negative degrees for digital maps. Each degree of latitude may be divided into 60 minutes, which may be further divided into 60 seconds.

Center of Site Latitude/Longitude (Degrees): In the degrees system, latitude and longitude are communicated in the degrees/minutes/seconds format. Coordinates list the latitude line first and the longitude line second. Take 38D 56’ 42” N, 92D 19’ 27” W as an example. This point is located at 38 degrees, 56 minutes and 42 seconds north of the equator and 92 degrees, 19 minutes and 27 seconds west of the prime meridian.

Center of Site Latitude/Longitude (Decimal Degrees): As an alternative to reporting latitude and longitude in the degrees/minutes/seconds format, AgSite reports also share latitude and longitude in decimal degrees. To convert location information from one form into the other, the Federal Communications Commission provides this tool: https://www.fcc.gov/encyclopedia/degrees-minutes-seconds-tofrom-decimal-degrees.

The decimal degrees system reports increments smaller than a degree as a percentage, or decimal, of the degree. In total, each degree has 3,600 seconds. Thus, both latitude and longitude are communicated in the DD.XXXX format. “D” letters signify degrees, and “X” letters represent the share of units smaller than a degree. Take 38.9450˚ N, -92.3240˚ W as an example. This point is located at 38 degrees, 56 minutes and 42 seconds north of the equator and 92 degrees, 19 minutes and 27 seconds west of the prime meridian. Latitude and longitude reported to four decimal places is accurate within plus or minus 36.5 feet distance.

Significance: Increasingly, consumers and landowners may use a global positioning system (GPS) to identify land locations based on latitude and longitude coordinates. A GPS unit reads transmission signals created by a satellite network to determine a location’s position. The latitude and longitude points shared in AgSite reports are those located in the center of the selected site.

Sources and Other Resources: